After the outer ring off bosses is dead we descend deeper into uldir bringing us to the most fun trash in the raid. There is random aggro-ing packs, sublime pathing, interesting knockbacks and a copious amount of being scared to die. If the trash was bad certainly the boss itself wouldn't right ? well you're wrong here. Raid size and composition have a large impact on this fight so in some sense it was an uphill battle but the Zul fight boils down to an add control type fight. Damage Zul down to 40% hp while not getting overwhelmed will all of the adds that join the fray to find yourself in phase 2 where dmg spikes on tanks and its a burn to the finish. A short type of fight that rekindled some memories of Blackhand in blackrock foundry. That fight had just one setting "full on". Dealing with limited dispel opportunities eventually we started pushing into phase 2 on a regular basis, now we just needed to push him into it while being in control. While attempting to handle a truckload of minion adds and dodging the blood stains on the floor Zul was finally put down to rest... again. 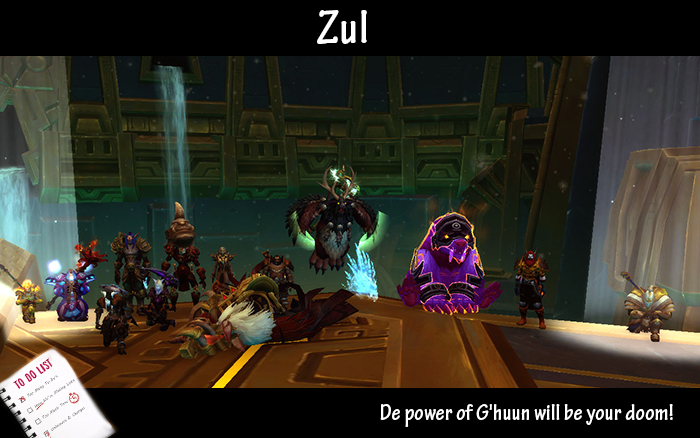