The final battle in Dazar'alor is the fight against Lady Jaina Proudmoore. The fight starts off on her flagship where you face off her icy abilities while being bombarded by other kul tiran ship cannons. This first bit is a bit of a snooze fest as aside from not standing in bad and moving into fire patches to negate her ring of ice ability there is not much going on unless you are ranged. Ranged deal with adds, exploding barrels and ballista commandeering. Phase 2 really starts the interesting part of the fight as jaina blinks away to create a frozen ice island in the ocean. There is a plethora of frost inspired abilities but the bottom line is all frost abilities (and jus time in general) grants you stack of a debuff that slows you increasingly more and at 20 stacks will cause you get encased in ice. Other people need to damage the ice cube to free you. While the second phase allows you to reset your stacks through barrels of flamey goodness in the last phase there is no fire whatsoever making it a race against time. Phase 1 and 2 quickly became a mere nuisance obstructing our time spent in phase 3 but after some attempts it was clear phase 3 required some finesse in order to get right. As with conclave timing is key in this fight and once we had our order of ice cubing down we started making progress. With "el jefe" gone the raid found new inspiration and managed to defeat Jaina. Well done all. 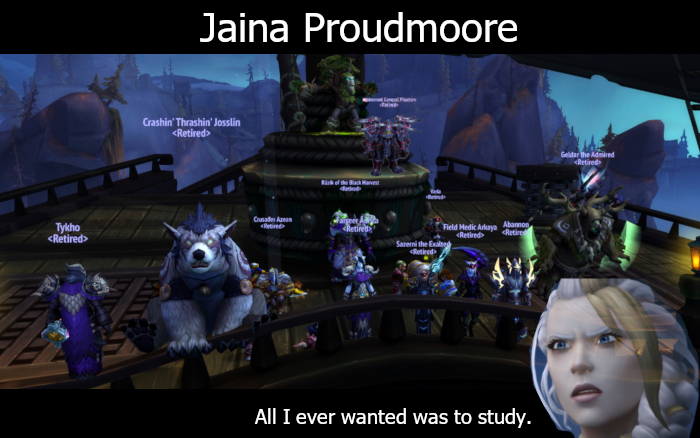