She split the sea, mocked us throughout the eternal palace but finally we are here to confront Queen Azshara herself. As an end boss the fight is long and rather intricate with a long, long, long, loooong list of mechanics and abilities. There are adds, debuffs and buffs, interrupts, projectiles but most of all there is line of sight. Yes that line of sight that is everyone's favourite new rubs me in the wrong way azshara mechanic. In a nutshell the fight revolves around using a titan platform which creates an airpocket in the ocean. Azshara does her best to power down the platform, causing the air bubble to collapse causing certain death while we do our best to keep the platform charged by giving it our sweet juicy health points. Adds, void zones, fixates and a plethora of other mechcanics try to complicate this as there is always something to do. Five phases total of which two are intermissions you think you can get some respite during those alas Azshara welcomes you with double decrees. Perform two tasks at once or suffer the dot of death as we have experienced many a times. While we made significant progress we felt that overall the fight was going too sluggish and eventually settled on ignoring the second tidemistress add. After rearranging our heroism usage we managed to push Azshara into the last phase while everything was under control. Now it was just about keeping calm and avoid nether portals on top of runes and/or the titan console. About that titan console that's a sheer death machine and requires the tlc of a newborn. After getting the hang of it slightly better more people remained alive for longer during this last phase to finally chip away at that last % of hp remaining and there she die....fell....got snatched by N'zoth whom we just released from his prison. Here we are feeling confused about what just happened and i'm not just talking about lor themar who thinks the fight is a shuttle run race. 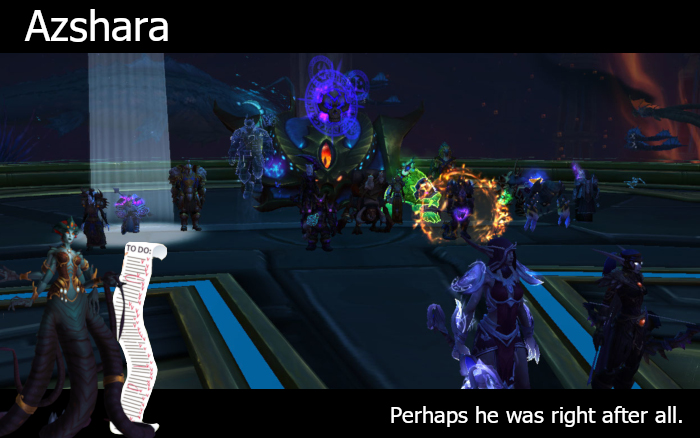