Delving deeper into the maw of Gor'ma we stumbled on a familiar face. Wait a minute didn't he look different before. Yes it's our old pal il'gynoth who used to hug a tree in the emerald nightmare while reciting bedtime stories. No longer looking like an infectious blob but as an actual creature now with wing! The fight is vaguely reminiscent of its emerald nightmare counterpart as blood adds play a role and so does cursed blood. The fight starts off really tame and slowly ramps up over time. Laser beams paint in the room causing you to have less free real estate. With the spawning of blood adds ramping up over time causing the dps to have less and less free time to actually damage Il'gynoth itself. As an extra mechanic players get mind controlled who will spread said mind control if they come into contact with other players. Since so many mechanics require the ranged to swap to these targets most of them actually wonder if there is an actual boss on this fight. With some adjusting to the mind control mechanic Il'gynoth, reborn or not, didn't prove that much of a hurdle. 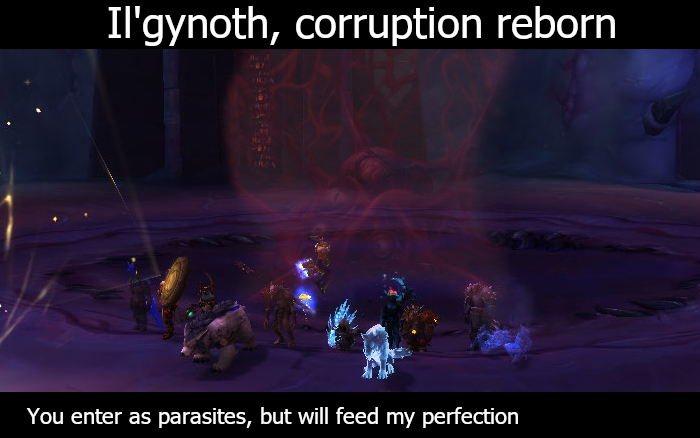