Further up in Castle Nathria we find Lady Inerva Darkvein who we bumbled into earlier while questing in Revendreth. She maintains the anima stored in the containers ready to be shipped off to the maw. Like a good little villain however she has skimmed some off for her own and has weaponized it. The fight itself deals with 4 anima containers which represent certain mechanics and these mechanics will morph into stronger or different versions pending on the amount of anima in said container. While one person is tasked with controlling/draining the anima in the containers there is plenty going on for the rest of the raid to be occupied with. Soaking, adds, interrupts, movement of debuffs, void zones on the floor, projectile dodging, distance dropoff explosions and last but not least triangle orbs and linked triangle orbs and cutter beam triangle orbs. Threading the linked beam of players through the orbs proved the most punishing mechanic as RNG can be a cruel mistress leaving behind a corpse with a beam pulsing out causing a wipe in the long run if not quicker. With some more experience under the hood we managed to polish up those trigonometry skills and Inerva was no more. 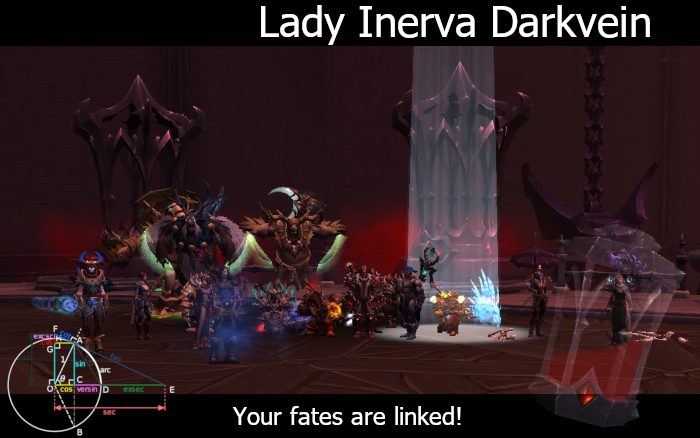